Most motorcycle clubs don’t make enough money to be profitable. MC’s often commit to buying or starting a business or two for extra income, but mainly cover their costs by having a club fee for each member. They also often host rallies or some other type of event for a yearly income.

Motorcycle clubs have quite a bit of expenses to cover, like the rent or mortgage on their clubhouse, water and electricity bills, and all the necessary stuff you might find in a clubhouse.

It might not seem like a lot, but go add up all of those things and you’ll see it can get costly.

If you were wondering if they make some extra cash through drugs, the answer is most probably not. In the MC I was in, they were very strict about this. If you get caught by the police with drugs on you, you would have to leave the club.

Most motorcycle clubs requires its members to pay a club fee. Though this isn’t at all profitable, it still is the way most clubs pay their expenses.

Basically, the Treasurer will make a summary of what the club’s costs would be throughout the year and divide it between each member as a monthly club fee.

If the club has some other form of income, the club fees would be less. Also worth mentioning is that most clubs don’t recruit people who do not have a stable job or other forms of income.

This is a prevalent form of income as many people like to hang out at the motorcycle clubs anyway. The way the club runs the bar is entirely up to them.

They might be open every night, on weekends or just on some rare occasions that they decide to let other people in. The reason why some clubs don’t like this idea is that it doesn’t feel like home anymore. Imagine having people come to your house every night, and sometimes even cause trouble.

So keep in mind, if you go to a clubhouse for a drink or two, it is their home, and you can’t just do what you want as a guest. They will throw you out, and chances are you are going to be bleeding.

This might be a bike shop that does repairs, custom work or paintwork on bikes. Like all businesses, this is risky and depends entirely on the client base.

Whenever something bad appears on the media about any club, it can affect their client base. Even if it is just for a short while it can significantly make an impact on the clubs income.

As mentioned before members are required to have a job when being recruited by most clubs, but a member might leave that job to work in one of the clubs businesses.

A rally is an event held by a club that other chapters, clubs and the public get to attend. These events typically last a whole weekend, and the clubs often make arrangements for camping grounds.

This is an excellent way to make some decent money for the club and also gives people, who are interested, a chance to see what the members are like in person. A club would typically host an event like this on a yearly or bi-yearly basis.

Not all clubs host rallies but might host smaller events. These could be a run, some local bands or a play day. A run is where they get together and ride out to another destination an often have a party there.

When local bands play at the clubs they would typically collect the entrance fee money for themselves, and the club would make some extra money from the bar but not always in this manner though.

Clubs might do one or two of these events that don’t make money for the club but instead for charity.

A motorcycle club can own any business, from a construction business to a fuelling station. It just depends on what the club decides makes sense for them and how far they are willing to take it.

There are a lot of legitimate ways to make money, and motorcycle clubs, in general, try to make a substantial income just like everyone else.

Let’s face it. You came here because you wanted to know if motorcycle clubs really make money off selling illegal weapons and drugs. My answer? In today’s world, not likely. Many, and I think most, motorcycle clubs have committed to legitimate ways of making money if they decide to do so.

Note that I do not refer to any singular club throughout any of my articles. If you are interested in how people join a motorcycle club, you can read this article: How to join an MC (Motorcycle Club) – A helpful guide 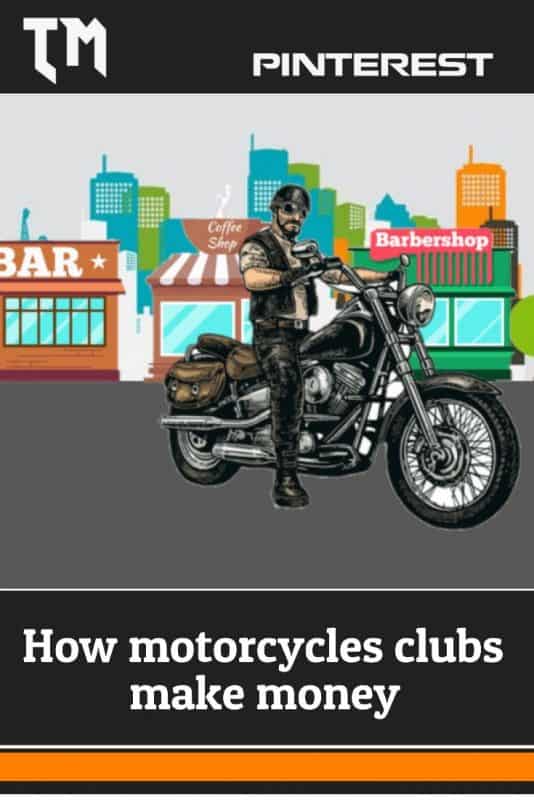