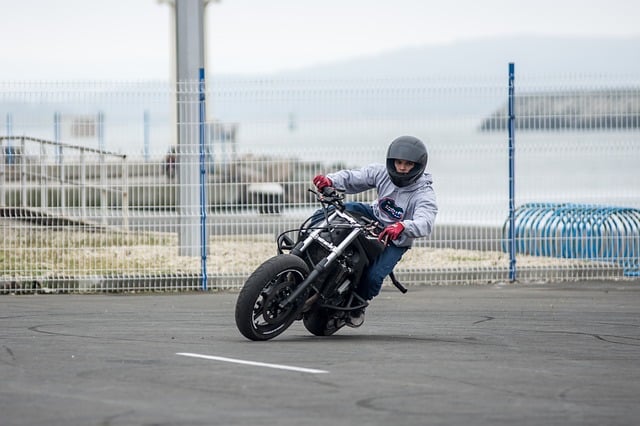 It’s probably nothing to worry about; it is most likely the fuel tank overflow or breather. Motorcycles have a breather in the tank that enables the tank to fill up with air as the fuel gets less. When the bike is lying down, the fuel spills out onto the fairings, if you have a sportbike, and when you pick it up the fuel runs down to the bottom where it drips onto the pavement.

As it is most probably the fuel, you don’t have to worry too much, but it doesn’t hurt to have a look if everything is still in place and works properly. We will have a look at how to inspect for leaks on the bike and also how to pick your bike up again.

The bike is still down

If your bike is still down, I don’t think you would be reading this. It would be best to get the bike back up as soon as possible.

When you do have it up, don’t start the motorcycle immediately; give it some time to let the oil run back down to the sump. If the bike was down for a while (maybe it fell over while you were at work) you might notice some heavy smoke coming from the exhaust.

This would mean that the oil had run through the cylinder rings and it should burn out in a minute or two of idling.

So let’s have a look at how to get your bike back on two wheels again with these simple steps.

Fallen over to the left (kickstand side)

Fallen over to the right

We have a leak

As soon as you have your bike on two wheels, it’s time to push your motorcycle to a safe spot and inspect it for damaged parts. If your fuel tank was anywhere over halfway full, you would probably see the fluids leaking from the bike as the fuel came through the breather.

The breather is what allows air into the fuel tank as the fuel is being used. If there was no breather, the fuel tank would create a vacuum inside which would eventually be strong enough to stop any fuel getting to the engine.

On a standard or cruiser bike, you would immediately see the fuel running over the tank. But on most sportbikes, there is a plastic cover over the tank; the fuel would run inside all of those pretty fairings and start dripping as soon as you have the bike in the upright position.

With this said, it is still a good idea to look for damages. If you think it’s not fuel coming out of the bike; the most obvious places to look at is the radiator pipes and engine casing.

For a liquid-cooled engine, radiators have there outlets and inlets mostly on the sides making it prone to damages when dropping the bike.

The pipes for these radiators are commonly rubber (I think all of them actually), so it shouldn’t be damaged from a little drop unless your bike is old and you haven’t gotten to replacing those hardened rubber pipes as you should have. When riding again, keep an eye on the engine temperature just to be safe.

The less likely leak is on the engine case; I don’t think a regular drop would be a cause of this. But if your bike was standing next to some rocks, it might be possible.

Oil is much more sticky and thicker than petrol or water, but keep in mind that when your fuel runs down the inside of your fairings, it can take along some of that road tar that got stuck there making it look thicker and more oily looking.

If you have a severe oil leak, it is crucial that you get someone to pick up the bike and then not ride it. No oil eventually means no bike!

The worst of it

I always liked to park my bike on the walkway in front of the shop, but I needed to go up the curb to get there. One day, I don’t know how, I stalled my XR halfway up the curb, and my feet couldn’t reach the ground anymore. I fell hard and broke my mirror.

The worst part of dropping your bike is the fact that someone might have seen you. Not really, I don’t give a damn about them. I do care for my bike, though.

If you drop your bike, it’s not the end of the world. If you need help, ask someone. And ladies, if you are alone next to the highway and don’t know what to do; take your helmet off and put it down a little way behind your bike on the road.

This is a distress signal for bikers to know that you need help, even though a motorcycle kissing the pavement might be just as good of a sign. I can promise you someone will stop to help you.

Dropping your bike is bad. Being able to pick your bike up again without breaking your back or hurting yourself is great. A little bit of fuel running down isn’t that big of a disaster.

Make sure you checked for all possible damages and don’t be afraid to ask for help.